Over 30 Years of
Experience

Attorney Bernard Grimm in the Community 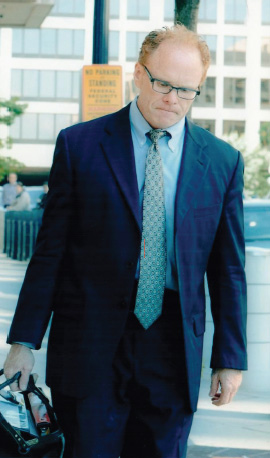 The Law Office of Bernard Grimm is a boutique law firm located in Washington, D.C. with a focus on criminal defense litigation including government investigations, grand jury investigations, tax, fraud, and bribery. Bernie Grimm’s firm practices in both federal and local courts throughout the District of Columbia, Maryland, and Virginia. With over 200 jury trials and over 30 years of experience, Bernie’s strength is aggressive litigation. The most effective way to resolve criminal matters is by demonstrating to your opponents that you and your client are willing to take the next step.

Washingtonian Magazine recognized Bernie Grimm as one of the top 100 lawyers in the metropolitan area. The Washington Post named Bernie one of the Top Criminal Lawyers in Washington, D.C. Bernie Grimm is a member of the American College of Trial Lawyers, National Association of Criminal Defense Lawyers, was previously President of the Public Defender Service Alumni Association, and formerly sat on the Board of Directors for the District of Columbia Law Students in Court. As stated in a recent article Bernie Grimm “has become something of a legend in Washington courthouses, tirelessly defending [clients] without the backing of a big law firm”. Bernie Grimm is a regular guest on Greta Van Susteren’s number-one program, “On the Record with Greta Van Susteren”. He is also the exclusive legal consultant for Fox 5.

Unlike large firms, Bernie’s firm only takes select cases where each client receives individualized attention by the same attorney throughout their case. Its size permits the firm to take cases at a more competitive rate than large firms and also allows for a greater focus on client needs. The Law Office of Bernard Grimm brings together years of courtroom experience, strong legal skill, and a solid understanding of criminal defense strategies, investigations, and the court system to every case that it handles.